The Orange Water and Sewer Authority (OWASA) had never been satisfied by its sewer assessment and asset management program. As a special purpose government commission, it relies on service fees, not tax dollars, to provide water, sewer and reclaimed water services to select parts of Orange County, North Carolina, including the University of North Carolina at Chapel Hill. The organization manages an extensive and complex infrastructure, including 343 miles of sewer pipe and some 22,000 water connections serving a population of approximately 80,000 people.

Without adequate tools, OWASA’s experienced team struggled to maintain this network, and its software didn’t fit the group’s work style. OWASA’s leadership was ready to take a hard look at its assessment system and find new ways to improve workflow. Their needs were specific: They were heavily invested in their GIS system, and they would have to find a tool that would seamlessly integrate with Cityworks. But when the OWASA team saw a live demo of WinCan’s versatility and effortless integration at a Cityworks conference, they knew they had their answer.

Support from the start

The WinCan service group communicated clearly with the team in North Carolina to ensure they had everything they needed to optimize WinCan VX’s effectiveness. The thorough preparation meant that when WinCan pros arrived in North Carolina for the implementation, they could get to work rather than sit in a conference room tinkering with the back end. “Not all vendors do that,” notes Ryan Byars, database administrator at OWASA. “It takes time to make sure everything is set first. But it meant that the WinCan reps could really get in front of the end users once they were here.” OWASA also procured a new purpose-built van and camera to launch with the new software. 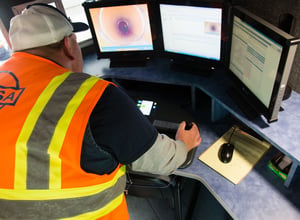 Reaching a new standard of performance

The camera operators at OWASA were quick to share their satisfaction with the new tools. The software was intuitive and the integration worked well. Cityworks CCTV inspection records were automatically populated with data from WinCan, and the system wrote file paths to media stored on the network drive. In the past, the team had had trouble meeting reporting metrics and goals; a recent review revealed they are currently ahead of schedule.

The new software has also made collaboration easier. OWASA relies on contractors for some of its CCTV operations. The OWASA team used to manually enter inspection information submitted by contractors, but now the data can be submitted effortlessly via WinCan. And because the software aligns neatly with Cityworks, integrating that information into larger infrastructure records is just as easy.

Customer service continues to stand out as a highlight of OWASA’s engagement with WinCan. As Byars explains, it’s hard to know how good customer support will be until you need it, but WinCan is unique among his vendors. “WinCan’s team shared their business cards, so I can call a specific person to ask a question or get an update. When we were working on getting our prerequisites met, we were able to schedule a session with a developer and fix the problem on the spot. They’re hands on, that’s how you get things done.”

However, WinCan’s greatest strength may be how effortless it is. As part of a non-profit agency, OWASA’s small tech team has a long list of responsibilities. In the best possible way, says Byars, “WinCan has just faded into the background. It just works.”

Want to learn more about how WinCan can integrate with Cityworks and other asset management platforms? Schedule a demo with a pro: