Sewer Basics: Parts of a Manhole

Manholes give personnel and equipment access to sewer lines for inspection, testing and cleaning. They are built in areas where there is a change in the sewer line direction, slope, elevation, pipe size and junctions. The circular, usually cast iron plates seen on roads across the country cover underground confined spaces that serve a fundamental role in the making and success of a sewer system.

While manholes are just one part of a sewer system, they have a number of features and components.

The channel is a conduit located at the bottom of the manhole for wastewater to flow through from the manhole inlet to outlet.

The invert is the lowest point of the channel inside the manhole. Its characteristics are important for determining the function or flowline of a pipe.

A manhole bench is the infill concrete poured between the walls of the manhole and the sewer pipes. Its main purpose is to direct flow back into the channel should a back-up occur in the manhole due to blockage. It can also be used by maintenance personnel to stand on at the bottom of the manhole when servicing the channel.

Manhole steps, most often made from concrete or plastic, are steps on the walls of the manhole for personnel to use to safely climb down when inspecting, cleaning or repairing. However, some utilities prefer to use a ladder to enter and exit.

The barrel section of the manhole is the widest point, and essentially the body of the underground space. It connects the base of the manhole to the cone.

The chimney of the manhole is the neck of the underground space, connecting the vertical manhole barrel section to the casting frame supporting the manhole lid/cover.

Closing the underground space from the outside are the manhole cover and ring. 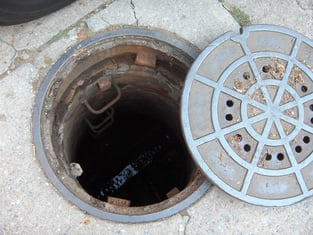 Typically made of cast iron, the ring serves as the holder of the manhole cover, built just below ground level to ensure the lid doesn’t sit any higher or lower than the ground around it. In the U.S., manhole covers are almost always circular — though in other parts of the world they may be square or rectangular — and often are marked by a letter “S” in the middle.

Image courtesy of Joe Shlabotnik via Flickr CC BY 2.0