The Evolution of Sewer Software

In spite of advances in new sewer pipe material, the evolution of sewer inspection was relatively slow throughout most of the 20th century. Before the advent of camera technology and sewer inspection software, lamp-holes were used to gaze down into sewer mains to ensure water was flowing. If there was no water flowing or if the water was pooling, then the maintenance crews knew there was a problem. These wastewater professionals conducted most of their inspections and maintenance by entering the sewers and looking down main lines with nothing but their eyes and a bit of auxiliary light, but we’ve come a long way since then.

With the passing of the Clean Water Act (CWA), new regulations across the wastewater industry led to the standardization of sewer inspections via organizations like NASSCO and WRc. Meanwhile, the growing accessibility of personal computers gave rise to new methods of collecting and coding inspections, and WinCan pioneered that technology, creating the first “tech trend” in the sewer industry. Sewer inspection would never be the same. With the turn of the century, engineers were beginning to see more clearly the impacts of population growth on municipal sewer systems, and today, the drive toward more advanced technology is stronger than ever, as we expand our use of predictive modeling and data-centric solutions.

Sewer inspections have evolved drastically since the days of lamp-holes, and without well-integrated, standards-certified inspection software to meet the growing demands of the industry, who knows what the wastewater world would look like today.

In the 1970s, as the impact of effluent on the environment became more apparent, the United States passed the Clean Water Act, paving the way for new EPA regulations that would require more in-depth inspection methods and the standardization of data. The goal was to curb water pollution, but the effects of the CWA rippled through the industry, bringing more focus on transparency and accountability of municipal sewer upkeep. But more importantly, the CWA created a means of enforcing these regulations, putting pressure on municipalities to record and archive sewer inspection data, and in 1990, WinCan was born.

When WinCan debuted, it was the first sewer inspection software the world had ever seen. The idea was simple: make it easier for wastewater professionals to collect, code and archive inspection data. Where once operators were limited to pen and paper recording methods, WinCan opened the door to a new method of inspection and a new market for sewer inspection technology.

The National Association of Sewer Service Companies, more commonly known as NASSCO, was established to give a voice to sewer professionals in every corner of the industry. Not only would it set the standard for wastewater inspection in the United States, but it would grow to be the most widely used defect classification system in North America. Adapted from the standards put in place by the United Kingdom’s Water Research Center, or WRc, NASSCO’s standards would soon span pipes, manholes and laterals, beginning with PACP in 2002 and followed by MACP in 2006 and LACP in 2010. 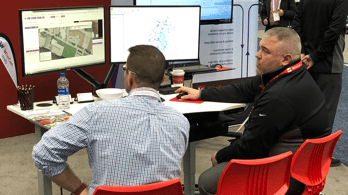 With similar sewer inspections standards cropping up around the world, the industry needed a way to more easily conform to regional standards. Software like WinCan stepped up to provide a means of certifying data and easily coding observations to any inspection standards. Today, WinCan supports 30 standards in 30 languages, a testament to the fact that technological advances in inspection software have been providing solutions to meet industry trends for decades.

As municipalities continued to grow in population throughout the early 2000s, concern over the efficiency and integrity of sewer infrastructure grew as well. In many parts of the US and around the world, wastewater professionals were faced with the challenges of increased water use, pipe corrosion, infiltration and inflow. Municipalities needed a way to analyze their sewer networks based on geography, and the inspection software market would deliver a solution once again.

WinCan was the first inspection software on the market with support for GIS map integration, and its future partnership with Esri would only further enhance the mapping and analysis capabilities of sewer professionals. For the first time, the industry would have the opportunity to understand the geographical nuances that affected municipal wastewater systems and cater inspection workflows to the individual needs of the community. However, population growth was just one of many influential trends of the 21st century, and as technology changed, so did our approach to sewer infrastructure.

Within the past 10 years, the sewer industry has seen advances in technology ranging from robotics and AI to lidar scanners and predictive modeling. But this new tech didn’t arrive without reason. Engineers needed a way to simulate new infrastructure technology and conduct in-depth inspections of current systems in order to justify upgrading or rehabilitating existing infrastructure.

While sewer crawler companies adapted to the trend with laser scanners and 360 cameras, inspection software companies responded with new forms of data visualization, including 3D modeling via applications like WinCan 3D. WinCan also gives engineers the ability to analyze ovality and criticality through the use of laser measurements and side scanning support, again a first for the industry. And as our capability to collect in-depth sewer data has grown, the ability for inspection software to securely and efficiently store and utilize that data has drastically improved.

The most recent trend in the wastewater industry is all about data: collecting it, storing it, analyzing it, and most importantly, using it. We’re living in a data-centric world, and the wastewater industry is no exception. Data visualization via VR and 3D modeling is allowing us to gain a new perspective on sewer infrastructure, while AI-supported data services are expediting workflows for defect coding and rehab planning. Not to mention, cloud storage and 5G make data available anywhere at any time. And because sewer inspection software has evolved to meet the demands of the industry, WinCan can support it all.

WinCan has evolved dramatically since 1990, and still it continues to grow and adapt. The industry will only continue to change, which means operators and engineers will continue to need innovative, flexible solutions from their inspection software. And while there is no telling what the future may bring, WinCan has proven itself to withstand the increasingly complex challenges posed by the industry.

To see all the capabilities of the world’s first ever sewer inspection software, request a demo of WinCan VX: