How AI Learns to See Defects

Although artificial intelligence (AI) won’t replace wastewater professionals, the sewer industry is making great strides in developing AI algorithms that can monitor data, predict outcomes and complete tasks in the same way a human would. From using telemetry data to improve upon hydraulic modeling of sewers, to AI-powered applications that identify anomalies in effluent, machine learning has enabled sewer professionals to better see, understand and manage wastewater and the infrastructure that transports it.

But when considering how AI actually “sees” visual information, it’s important to keep in mind that the foundation of machine vision is usually nothing more than a series of deep learning algorithms, and one way engineers use these algorithms is by constructing a specialized neural network known as a convolutional neural network, or CNN. With this foundation in mind, developers have found that AI can provide several innovative solutions to problems at every level of the wastewater industry. 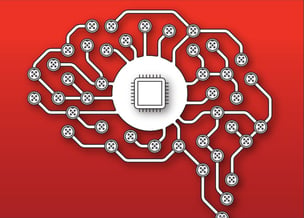 Deep learning is a powerful method with which AI is taught to learn how to complete a task. This process usually begins with a set of training data and an engineer who corrects the AI when it gives incorrect results. Imagine a student sitting in a classroom. The student represents the deep-learning AI, while the teacher represents the engineer. The teacher feeds the student information, or training data, which the student will then need to think about, remember and apply correctly during a test. But what allows the AI to “think” about the data and use it effectively later on? While a human student has a brain to process, retain and apply knowledge, AI uses a neural network to the same end.

An artificial neural network is a series of deep learning algorithms that are designed to emulate the human brain by breaking down perceptual information and identifying patterns. Generally, a neural network processes small pieces of information and compares them to other pieces of information. A value is then given based on what the AI knows about the connections between the two. For instance, a neural network designed to identify cracks in sewer inspection footage might first look for thin lines of dark pixels before scrutinizing the pattern of those lines to determine whether the line is a crack in the pipe or a root infiltration. The more connections a neural network has, the more complex tasks the algorithm can complete, because there is more information gathered and applied to the AI’s final prediction.

There are several types of artificial neural networks, and although AI has a role in wastewater beyond its visual applications, the convolutional neural network (CNN) is one of the most common in the sewer inspection industry, as it provides the framework for image and video processing. CNN-powered machine vision has become popular in the automotive industry for its ability to guide self-driving cars, but in the sewer industry, CNNs are being used to construct tools that boost the efficiency of many different wastewater processes, from inspection to treatment.

While it’s easy to say a CNN is akin to a human’s visual cortex, it’s important to remember that artificial neural networks are actually made up of a series of logical and mathematical steps that are repeated, interconnected and, ultimately, trained to give a desired output. While a CNN is just one type of neural network, it’s one that has grown in popularity in the sewer inspection industry for its ability to tackle complex problems involving visual information. And as often as AI is paired with science fiction, it’s really nothing more than a complex way of using math to process information, just as human cognition can be reduced to the binary firing of neurons. By exploring the architecture of a convolutional neural network, it’s easier to understand how and why AI is revolutionizing the wastewater industry as a whole.

Convolutional neural networks take 2D images and determine patterns within those images to better understand what the image is, and thus assign predetermined rankings and/or categorizations to it. For example, a CNN can take an inspection image of a root in a pipe and process that image (and several other images of root growth) until it can accurately identify a root that it has never seen before, all by looking at the pattern of pixels in the labeled training images.

In general terms, the process begins with parsing out individual portions of a labeled training image by having the AI look through different filters. These filters represent aspects of the image that the engineer wants the AI to look at, focusing the AI’s “eyes” on that aspect only. From there, the AI creates a new image based purely on that filter, then adds the new image to a stack of images created from other filters. This is repeated until all aspects of the labeled training image have been transformed into new images that can then be compressed and digested by the AI.

In the example of inspection footage, the AI may take a small section of the image that contains a crack and use it to create a new image that represents what the AI sees when looking through that filter. As you can imagine, this creates an image that looks like the crack from the original image because the filter is only letting the AI see cracks and nothing more. Then, the AI looks through a different filter that only shows root growth, resulting in an image that only contains roots.

Now, imagine you have created several new, simplistic images using filters from other aspects of the image until you have dozens of unique images that each show a small portion or feature of the original training image. Because the training image is labeled by the engineer, the AI knows what each of the new images contains, and eventually, those unique images can be compressed into an output image that resembles the original image. From this, the AI learns what individual features look like and can give a prediction as to whether or not an image has roots, cracks or both.

Why Are CNNs Used For Wastewater?

Because convolutional neural networks are designed to process the intricacies of perceptual information, they are highly qualified to aid sewer teams in the reviewing of inspection media, but CNNs are already doing more than that. Studies around the world are exploring the full capability of CNNs as a way to enhance CCTV footage and images, whether that entails automatically estimating the water level in a pipe, identifying parts of a manhole or even scoring pipe sections based on severity of defects.

But CNNs aren’t the only neural networks making waves in wastewater. According to Stéphane Cuenat, WinCan’s head of research and development, “CNN is basically only an architecture. Nowadays, research teams are proposing potential alternatives to CNN like ViT (Visual Transformer), which could help the industry to reach the next level when it comes to the performance of their models.” As technology changes and new deep learning architecture is developed, wastewater AI will likely take new forms and may even build on and away from the foundations used in today’s neural networks. But while the specific architecture may change, the principles of AI and deep learning continue to drive innovation in the sewer world.

Discover more about machine learning from WinCan’s free white paper about AI for wastewater or schedule a Sewermatics consultation to learn more about WinCan AI.