When approaching sewer maintenance, inspection teams need to both see defects and determine what kind of defects they are. That might not be asking much of a NASSCO-certified engineer, but the simple task of seeing and identifying defects is a tall order for artificial intelligence (AI), which is only starting to scratch the surface of its true potential in the wastewater industry. 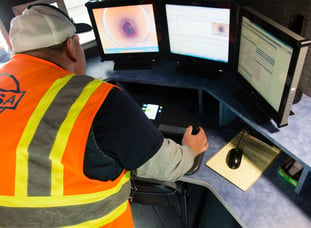 As the industry moves toward fully autonomous AI defect coding, many municipalities are interested in the technology as a means of improving coding speed and accuracy. This has some AI engineers investigating the role of image resolution in training sewer inspection AI, and many are finding that training with both high and low resolution inspection media can improve AI performance.

What is Image Resolution?

In simplest terms, resolution determines the clarity of an image. But to be more precise, resolution is actually in reference to an image’s pixel dimensions. For instance, the resolution of full high definition (HD) is considered 1920 x 1080, which is sometimes referred to as 2k because it is roughly 2000 pixels wide. By the same logic, 4k screens (also know as Hi-Vision Systems) hold 4000 pixels across. But standard definition (SD), which is the resolution most commonly seen among sewer inspection cameras, is closer to 720 pixels. The higher the resolution, the more pixels there are in an image and the more clear it is. For AI, each pixel holds a significant amount of visual information that helps the AI determine the contents of an image, but these images tend to be large and take longer to process.

In sewer inspection, many crawlers tend to collect inspection media in lower resolution. The frames used to review inspection footage are usually small, making fewer pixels satisfactory for the purpose of defect coding. However, low resolution can negatively impact an operator’s ability to see pipe defects, and water, dirt and debris only compound the issue.

This has led some sewer camera manufacturers, such as IBAK and Envirosight, to develop cameras with HD resolution, revealing a new level of clarity in the inspection process. Better image clarity has the potential to expedite coding and improve accuracy of human operators. But AI is quickly learning to process low and high resolution images with similar accuracy and speed, and with a bit more training, operator-supported AI defect coding will likely become an industry standard.

While machine vision may be able to decipher pixels more effectively than human eyes, humans have a distinct advantage over AI in that they can make more educated guesses. Humans have the ability to imagine what a blurry object in a low resolution image might look like in reality, allowing them to code more efficiently where low resolution is the standard. On the other hand, AI actually performs better in high resolution, but must rely entirely on the training that it was given, emphasizing the importance of teaching AI how to distinguish defects in both high and low resolution.

When training AI to see defects, it must be fed thousands of images with pre-labeled defects, giving it enough information to start identifying defects on its own. The visual information the AI collects from a given image is based on educated guesses that the AI makes, just like a human. But at this stage in the development of defect coding AI, humans still have the upper hand.

For instance, the AI might process a 224 x 224 square of pixels from a low resolution image, and it might identify and label a crack in a pipe. However, an operator looking at the same image might call the defect a fracture, noting a more significant separation in the pipe material. The operator knows what to look for, what the defects look like in reality and how the connectivity and nature of pipe material all play into the current condition of the pipe. The AI is simply looking for similarities between what it was shown in training and what it is currently “looking” at. It’s important to remember, however, that the AI’s performance has the potential to exceed that of humans if it is fed enough reference images to quickly and accurately recognize defects in different scenarios. 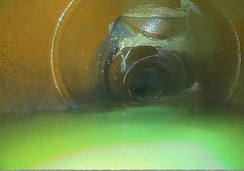 Because AI uses every pixel to determine the contents of an image, resolution plays an important role in every stage of AI defect coding. The goal of sewer inspection AI is the same as that of an operator: see and identify defects quickly and accurately. AI has the ability to scrutinize images pixel by pixel, breaking down visual information in a more formulaic way than humans can. And with a little extra training, engineers can use varying image resolution to help AI better distinguish defects in both high and low resolution media.

“Training on high resolution images can potentially help generalize a defect in the ‘mind’ of AI, making it easier to identify a defect in low resolution,” says Stéphane Cuenat, head of research and development at WinCan. “One way that we can do that is by feeding the AI thousands of high- and low-resolution images with similar defects, helping the AI to better understand what the defect looks like in reality.”

In order to reach its full potential, the AI needs to learn what a defect looks like in both high and low resolution, so that when an operator in the field feeds it an image, the AI is effective no matter the image’s resolution. This is a slow process not only for engineers training the AI, but for the AI itself, which takes longer to process a single HD image.

Cuenat says the results will be worth the wait.

“AI that can parse a crack from a fracture can also distinguish small roots and other defects that might go overlooked by the naked eye,” he says.

While Cuenat and other AI engineers work to implement varying image resolution into their AI training regime, the wastewater industry has already begun adopting it as a supplemental tool to aid inspection teams in defect coding. WinCan’s Sewermatics offers AI-powered defect coding services that further show the value of AI in real-world projects. By using the power of AI in tandem with a team of WinCan coding experts, WinCan has been able to take new steps toward more efficient, accurate and autonomous AI, and soon, image resolution may have little to no impact on the output.