Protecting Your Assets from Summer Storms: The Value of a Flood Plan

As the United States moves into the summer months, the nation moves from one flood season to another. Currently, St. Louis, Mo. and other midwestern communities are grappling with flooding brought on by higher than expected rainfall flowing into the Missouri and Mississippi rivers. As the summer continues, much of the Midwest and Southwestern United States will face high water events. Though occasional overflows are a natural part of living in a floodplain, major floods can bring a host of problems to an area, including damaged infrastructure and residences, hazardous waste leakage, and increased mosquito populations.


Where do floods happen? 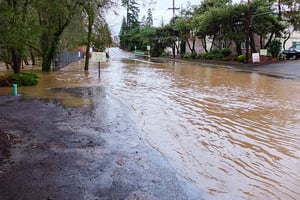 Flooding can occur throughout the United States during any season, though it is least common during winter. It can also occur for different reasons, each associated with certain topography and weather events. In early spring, it is most common in areas at the foot of snow-laden mountains. As the weather warms, snowmelt can overwhelm streams and ditches. During spring and summer, seasonal thunderstorms may bring heavy rains. Areas with flood-prevalent desert topsoil can suffer from flash floods that overwhelm the landscape in a matter of hours or even minutes. During the latter part of summer and into fall, coastal and nearby inland areas can experience flooding as a result of tropical storms and hurricanes. These intense storms bring massive rainfall along with storm surges and high winds. Hurricanes can bring widespread devastation to an area, and the devastation they bring often requires long-term, sustained support to repair.


How to prepare your utility


In all these cases, water and wastewater utilities have options for preparing their systems before and protecting their assets during emergencies. Every utility at risk should have a Flood Resiliency Plan, or FRP. The EPA provides a framework for identifying vulnerable assets, identifying mitigation measures, and building a plan to protect those assets and implement those measures. An FRP can include relocating critical infrastructure to higher-elevation, installing secondary power sources or creating procedures for predicted flood events.


As its name suggests, an FRP is not about eliminating the risk of floods or completely preventing any damage. Instead, it is focused on preparation. First, understand the risk to all assets. Identify which equipment and facilities are at risk, and understand the consequences of minor and catastrophic damage. Second, identify mitigation measures. Determine what can be done to either limit or prevent damage to assets. This can mean permanent changes or short-term actions taken in the days or hours leading up to a flood event. Third, develop a plan to implement these measures. If this means upgrading equipment, installing backup generators or simply being prepared to sandbag a pump station, take steps to ensure these measures can be taken without delay in a crisis.


As floodwaters fill city streets, some of the most basic aspects of modern life can fall away, and this loss can leave lasting consequences. In any emergency situation, the more prepared a community is, the simpler the clean up will be. WinCan Web is the most powerful cloud hosting solution for wastewater utilities. Storing your data in the cloud ensures that no information is lost due to on-site damage, and data is always available, rain or shine.

Flood Image Courtesy of Tom Good via Flickr (CC BY 2.0)