Fats, oils and grease, also known as FOG, is one of the most harmful types of waste flushed down the drain. The primary source of FOG is cooking and food preparation, and while residential homes are significant contributors, commercial restaurants and manufacturing plants are actually the biggest source. Most restaurants produce FOG constantly due the nature of their work. While many dispose of it properly via a trash can or recycling program, FOG still makes its way down into the sewers at an alarming rate.

What Makes FOG a Threat?

FOG is not water-soluble, which means it doesn’t break down easily in water alone. This is why oily or greasy hands still feel slick after washing them. While soaps may break down some oils, they still flush the chemical components of FOG down the drain where they can reform and even solidify in the sewers. 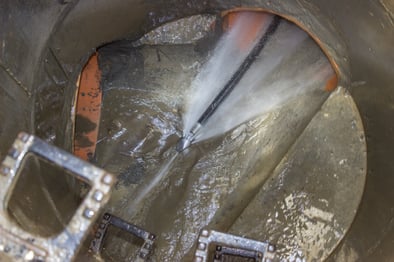 Although it may seem like any other flushable in its liquid form, FOG thickens as it cools, causing it to accumulate inside drain pipes and mainlines. Once in the sewers, it can absorb water, gaining additional mass as wastewater flows over it. This can lead to severe blockages, resulting in sewer overflows and even pipe bursts. In extreme cases, these blockages can become so enlarged that they become fatbergs, hard masses of FOG and garbage that require specialized cleaning efforts. Additionally, FOG blockages put pipe integrity at risk and can disrupt maintenance routines, leading to rehab and inspection delays. This is especially true when pipes already have sags or other defects where FOG can accumulate, making the cleaning process even more difficult.

FOG is also detrimental to the environment, as backups cause untreated sewage to enter local waterways and ecosystems. Disease-causing pathogens can easily work their way into animal habitats and affect the health of fish, wildlife and even humans. It’s common for these backups to clog septic tanks, destroy yards, flood homes and ultimately transport harmful bacteria into potable water sources.

How Does FOG Affect Sewer Inspection?

Most notably, FOG impacts the inspection process by causing more work for sewer teams. Often, blockages are found after reports are made of flooding or sewage backup, but it’s possible for operators to encounter these backups during routine inspection as well. In fact, routine inspections will sometimes reveal FOG build up before a blockage occurs, allowing the pipe to be cleaned without serious ramifications. However, once a pipe becomes clogged, there is a chance that the FOG has already affected the pipe’s integrity, and more thorough inspection is required after cleaning to ensure the line is intact.

Sewer teams have a variety of tools for cleaning FOG from pipes, such as jetters, scrubbers and rodders that manually break up the clog. Some cleaning teams also use a unique blend of saltwater that relies on abrasion to clear the FOG. However, the most effective method of prevention is source control.

How Do We Prevent FOG in Sewers?

The best way to prevent FOG from affecting sewer health is by refraining from sending fats, oils and grease down the drain. It sounds a lot simpler than it is, as many homeowners and even businesses don’t actually realize the amount of FOG they are contributing to the problem.

At home, FOG should be kept in a container until it has dried and solidified, and then it should be disposed of in the trash can. Even the garbage disposal isn’t a safe place for FOG. Restaurants and industrial sources are likely to have a harder time disposing of FOG due to the fact that they have so much to dispose of. However, there are many municipal and private-run programs that incentivize collection and recycling of grease from industrial sources. Plus, equipment like grease interceptors and traps make it easier to control the flow of FOG down the drain, capturing valuable runoff that can be properly disposed of or recycled. Ultimately, awareness and education are the most powerful tools in stopping FOG from becoming an issue, as knowing how and where to dispose of it is half the battle. If you’re a homeowner or business owner interested in learning about FOG disposal best practices, be sure to visit your local municipal website or explore commercial waste services like National Waste Associates to learn more about your options.

Request a demo of WinCan VX to learn how it is helping inspection teams identify and remedy the influences of FOG on sewer systems: