When AIMS companies set out in 2007 to build a turnkey operation providing municipal and industrial inspection and cleaning services, they had no idea just how much sewer data their hard work would create. Today, they operate out of 17 locations across the United States and provide a wide range of municipal wastewater services. Among their most popular offerings is manhole inspection, which has seen increased demand in recent years. As a result, project completion rates increased and datasets began to swell.

This growth presented a challenge for the AIMS analysis team. “They were simply doing more in the field than we could do in the office,” said Shane Willis, data manager for AIMS. “We usually have at least two crews and push them to get at least 20 manholes per day.” As the company expanded, however, crews began putting in 6-day workweeks to meet client demands, which created a seemingly endless backlog of manhole inspections to process.

Willis’s team responded to the influx of work orders by hiring additional defect coding staff, but COVID-19 further complicated the operation. The backlog continued building. Unwilling to compromise on customer experience and outcomes, AIMS turned to WinCan Sewermatics, AI-powered data services that would extend the bandwidth of its team to code manhole inspections at a faster rate. 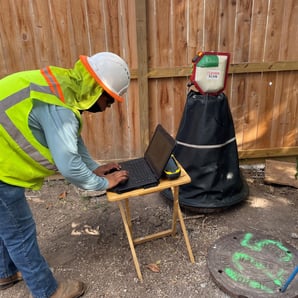 Sewermatics Steps in to Tackle Backlogs

A few phone calls and a demo of one of the industry’s most powerful AI engines led AIMS to become an early adopter of WinCan Sewermatics. The plan was simple: AIMS would send inspection media to Sewermatics via WinCan’s online inspection platform, WinCan Web. From there, WinCan’s AI would scan manhole data, identify defects, and code them according to MACP. Finally, a quick QA/QC check from the Sewermatics team would give it the stamp of approval before it would be made available to AIMS once again via WinCan Web – fully coded, AI accurate and completed.

How AI Fits the Bigger Picture

Sewer inspection AI is only part of a bigger shift AIMS made to differentiate itself in the industry. AIMS Regional Vice President Kent Ford said the company is providing a turnkey solution that customers recognize, and it’s the fine-tuned operations that have earned AIMS its reputation.

“It’s the little things we do in the office, like working with Sewermatics, that really sets us apart,” said Ford. “Things as simple as making sure the inspection data that’s being sent to the customer is accurate and on time.” Ford believes that getting a boost from AI during workload spikes not only makes a difference for Willis’ data team, but it helps sustain that reputation of AIMS as the well-oiled machine it is. 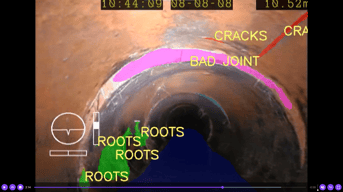 Ever looking for the latest in inspection technology, the AIMS team is determined to deliver the very best service, even if it means pursuing nontraditional methods. “You see AI popping up everywhere,” said Ford. “I think it’s going to have its place in this industry, and right now, we’re figuring out how that’s going to play out.” AIMS believes the work they do with Sewermatics will give them the time and resources to clear the backlog, support the increased demand for manhole inspections, and enable them to continue delivering timely, high-quality results to municipalities across the country.