Ovality measurements can identify potential risks to a pipe’s integrity, making them a vital part of sewer inspection and maintenance. With a laser profiler and WinCan on hand, wastewater teams can easily gather information about a pipe’s diameter as part of a routine inspection. Inspection teams simply need to gather media, calibrate the Laser Scan module in WinCan and record the data.

What is Ovality, and Why Does It Matter? 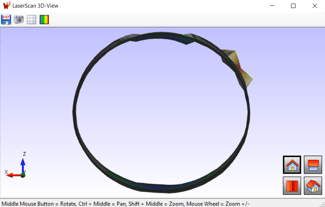 Pipe ovality is the amount a pipe wall has shifted from its original, round shape. Most commonly pipes begin to oval from the pressure of the load surrounding them, but they can also oval during installation. Preventative ovality inspections are the first line of defense against collapse, and it’s common to take ovality measurements shortly after installing a new pipe section to set the baseline for that section and allow for early intervention and rehabilitation.

If there is no intervention, severely oval pipes may cave in and corrode, eventually requiring a full excavation and replacement. To ensure this doesn’t happen, wastewater inspection teams can measure ovality as part of their routine inspections, and WinCan Laser Scan makes it easy to collect and analyze ovality data for more informed decision making.

Most sewer crawlers on the market today offer an attachment for laser profiling. These laser profilers vary in arm length and laser intensity, allowing for use in a variety of pipe sizes and materials. Because of the way laser profilers throw light onto the circumference of a pipe, the bigger the pipe is, the stronger and farther out the laser should project. This ensures that the camera on the crawler can capture the entire laser ring, which is essential to calibration and measurement.

Once the profiler is attached, capturing ovality data is quick and simple. When the operator has completed the inspection and the crawler is parked at the far manhole, all crawler lights and text overlays are turned off, except for the laser profiler. The crawler is then pulled backwards as steadily as possible toward the starting manhole. This allows the crawler to capture the laser ring along the entire length of the section. The operator can then visualize this data in WinCan 3D.

Once the video is opened in the WinCan Laser Scan module, indicate start and stop times for the inspection video, narrowing the focus from the beginning of the laser profile until the end of the calibration ruling. Set the video to the point where you can see the horizontal calibration ruler, and then, click the Calibration button. Use the “Set Values by Mouse Clicks” button and follow the onscreen instructions to calibrate the video to the software. Once calibrated horizontally, repeat this step with the vertical ruler. WinCan Laser Scan allows you to save calibration settings, so you don’t have to calibrate every time you use the same equipment.

From there, head over to Scan Settings to adjust the ring laser properties. This is where you’ll input step distance, min and max search radius, and the clock/angles WinCan should ignore, such as the small sections where the laser arms overlap the ring. There are several image filters in this panel, and every video is a little different. Take some time to explore your options and ensure your ring is as bright and clear as possible before starting your scan.

Once the inspection media is calibrated to WinCan Laser Scan, users simply hit Start Scan to quickly review ovality at any area along the pipe section. The media player and scroll bar make it easy to review measurements manually, but the most important metrics to review are in the ovality report. 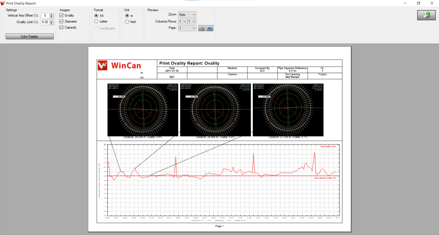 The ovality report, generated by the Print button in WinCan Laser Scan, showcases the full range of ovality found in a pipe section. Using parameters put in place by the user to indicate max ovality, the report gives a clear overview of the most critical areas of the pipe, capturing snapshots of these areas to give a better understanding of where the problem may lie. The ovality report also gives in-depth visualizations and measurements to help engineers determine the likelihood of the pipe needing repair. In addition to ovality, this report also addresses capacity and median diameter.

Using the time-distance file created during the profiling process, WinCan is also able to build a 3D representation of the pipe with heat mapping to indicate areas of severe ovality. This visualization is accessible through WinCan 3D, and it can give additional insight into potential obstacles rehab teams might encounter.