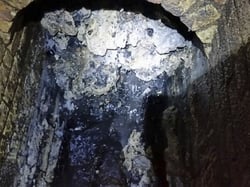 What is longer than two soccer fields and weighs more than 19 African elephants? A fatberg that was recently found in east London, that’s what. The fatberg, coined ‘total monster’ by The Guardian, weighs 130 tons and is 820 feet (250 meters) long. Thames Water and Lanes Group, WinCan Web sewer asset management software users, found this massive deposit of fats, oils, grease, wipes and other household waste during a routine inspection in Whitechapel, in London’s East End. Sources say it will take sewer workers three weeks to break up the fatberg and restore the sewer pipe. Once broken up, the waste will be sucked up and taken for disposal at a local recycling plant.

The fatberg was discovered through a routine CCTV inspection. A mass of this size could have put the streets of Whitechapel at risk for sewer backups and raw sewage flooding. In an interview with The Guardian, Matt Rimmer, Thames Water’s head of waste networks, says “It’s fortunate in this case we have only had to close off a few parking bays to get to the sewer. Often we have to shut roads entirely, which can cause widespread disruption.” He also said his eight-person crew is working seven-days a week to clear the blockage using high-powered jets and shovels--progressing at a rate of 20-30 tons a day. London is no stranger to such blockages; Rimmer said they find an average of eight blockages per week and spend roughly $1.3 million per month removing them from their systems.

The inspection crew used WinCan sewer asset management software to record the observations found in the pipe. The inspection video shows the 47-inch high by 27-inch wide egg-shaped brick pipe to be completely blocked by the fatberg. The survey report also shows several grade-4 defects throughout the pipe. The observations can also be viewed on a map using WinCan’s mapping tool. Findings such as this one are a great reminder of the importance of having a proactive sewer maintenance program.

Click below to request a free demonstration of WinCan Web and see for yourself what WinCan Web can do to improve your sewer inspection workflow.