Data takes on new meaning when it’s laid out on a map. Heat maps, iconography and geographical features all help build a clearer picture. The human brain naturally processes images differently than it does letters and numbers, allowing us to gain a unique understanding of data sets and how they interact with each other. In the world of wastewater management, mapping data can make it easier to understand where a sewer system is located, as well as potential risks to the community and infrastructure. 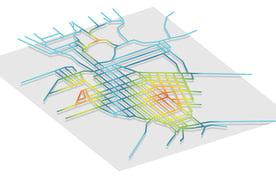 GIS integrations tie inspection data to specific locations on a map and give municipalities a birds-eye view of their infrastructure and its condition. On top of that, 3D-modeling technology has made it possible for inspection teams to capture accurate measurements of a pipe’s location, dimensions and curvature. With such tools, inspection teams can design digital models of pipes and manholes that open the door to a wealth of VR and AR possibilities. Data visualization is a powerful planning and analysis tool, and as the wastewater industry adopts new visualization technologies, inspection teams will continue to gain new insights into their sewer networks.

There is a reason people say that “seeing is believing.” A 2014 study on the learning styles of medical students found that the general population actually skews toward visual learning as opposed to kinesthetic or auditory learning. It found that roughly 65% understood visual information more easily than any other type, emphasizing the importance of data visualization in complex analysis tasks.

Visualizing information engages a different part of the brain that relies more heavily on spatial intelligence. We make unique correlations between the hard data and its visual representation, allowing us to understand the data as it pertains to the real world. In sewer inspection, this might mean identifying a section of pipe that is prone to I&I and using satellite mapping of the area to find potential water sources contributing to the erosion of the pipe. We can also gain perspective on how statistical data compares to spatial data. For instance, WinCan Map can show the full scope of a system’s condition, helping to make more informed decisions about which sections should be inspected or repaired. 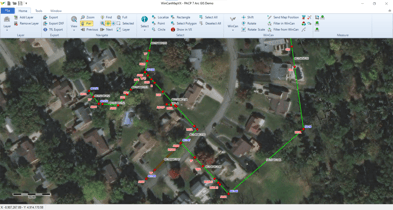 Technology has advanced so dramatically over the past 30 years that it’s easy to forget that city planning used to be done entirely on paper. Even after the turn of the century, many municipalities relied on paper maps as their only form of sewer inspection data visualization. The value of a visual was so well-understood that teams labored over hand-drawn maps to determine pipe location and condition.

Now, inspection software like WinCan VX gives municipalities the ability to collect, code and visualize data from an entirely digital environment. By overlaying data onto GIS maps on platforms like Esri’s ArcGIS Pro, users can not only streamline work order creation, but also review all of the data associated with a given pipe, manhole or lateral. Additionally, GIS integrations allows users to quickly edit data by selecting the exact segment from the map view, meaning users have more control over their data, more immediate updates to their asset database, and fewer opportunities to encounter the outdated information commonly found on paper maps.

Furthermore, 3D modeling adds another layer to digital infrastructure maps, enhancing an operator’s ability to pinpoint a pipe’s depth, inclination and curvature. Proximity to geographical features may put unique restrictions on rehabilitation projects, and knowing such limitations before arriving on a jobsite helps avoid the surprise costs and wasted time associated with the constraints of antiquated mapping techniques. 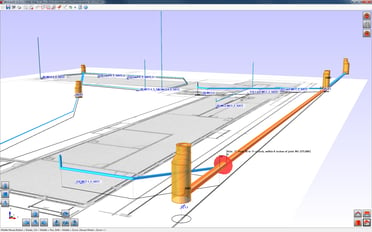 Using virtual and augmented reality (VR/AR) equipment out in the field may seem like a leap from digital mapping conducted in a browser, but like artificial intelligence, VR and AR inspection technology is on its way to the market. In fact, many municipalities have already begun collecting XYZ sensor data during sewer inspections, giving them the ability to build accurate 3D models of their systems to be overlaid on GIS maps. These models can be built and exported to analysis platforms that simulate flow, infrastructure wear and tear, risk of failure, and the effects of local geography on system function.

Now, municipalities are looking to outfit their teams with a means of on-site analysis that allows them to view 3D models of the pipes below their feet, using the camera on their phone or tablet and a VR/AR-enabled application. With such a device in-hand, inspection and rehab teams can walk the length of the pipe and survey surface-level features that might interfere with rehabilitation projects. This effectively removes the guesswork from rehab planning and helps inspection teams better understand the influences of the surrounding area on infrastructure. It also allows them to pinpoint and target the physical location of defects during inspection and repair.

Data visualization has changed the way inspection teams understand sewer systems, and as technology continues to build on these analysis tools, municipalities are beginning to take advantage of the insights revealed by seamless GIS integration, heat mapping and 3D modeling. Studies are finding that people rely more heavily on visual information, and by enhancing the ability to see inspection data as more than letters and numbers, the wastewater industry has the opportunity to revolutionize the increasingly data-centric world of sewer inspection.

Learn about data visualization services from WinCan’s Sewermatics with a free consultation: