Atlantic, Iowa’s vibrant, historic downtown and community traditions keep the past close, but that hasn’t stopped it from

modernizing and updating its utility operations.

“We are probably one of the most proactive small towns there is,” says the city’s collections lead, Clint Roland, with a laugh. “For a small town of [around] 7,000 people, we have our own combo vactor truck, trailer jet and a brand new camera system. We’ve just got a really good small community that works well. It’s just that good, small-town Iowa values.”

This proactive culture was on display in the summer of 2018, when the city of Atlantic decided it needed to replace the software it was using to document its sewer inspection data. “We went from a process where … the guy that was [previously] in charge had the whole map in his head,” Roland says. “We had physical maps but nothing was ever written on it, no notes were written on it. That resource left, and I took over the position. I was starting to have to remember things in my head.” He realized that wasn’t an effective way to manage the rural city’s systems moving forward, so he sought out a solution that offered a mapping feature.

That search led him to WinCan.

Preparing for the Future

The department decided to implement WinCan’s software. With help from the WinCan team, Roland was able to map 936 manholes across the town using a small, all-terrain vehicle. “So twenty years from now when I walk out the door, whoever comes in has an advantage,” Roland says. “They don’t have to re-learn everything. And now there will be a good history of everything so we can make some educated decisions on where we need work.”

Since implementing the software, the crew has not only documented the newly-mapped manholes, but they’ve also backdated reports with previously-gathered data.

“We’ve always [televised]. We ran a different software before, so I could make official reports, but there was no GIS,” Roland says. “There were enough manholes out there that weren’t put on any physical map, we just kind of knew where they were.

So we wanted to get a true map together.” 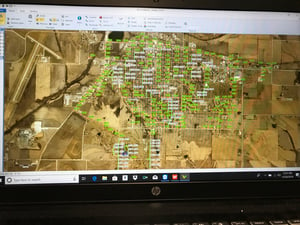 Having accurate data centralized in one location also helps ensure the city is using its resources most efficiently moving forward, Roland notes. “We were spending some money and lining areas and doing some other work where I think that money could have been directed in other areas of town, but we had no real data saying ‘this area of town is worse than this one,’” he says. “[Through our systems] we are justifying to the city that this upfront cost [is] actually saving us on the back-end from hiring someone to come and do this work and give those reports to us.”

The software upgrade has also helped lessen the responsibilities of an already thinly-spread crew, Roland says.

“I think we find the same issues every town does, … [but] for me to be able to relay that information onto people is a lot easier, so they actually see more of what’s being done,” he says. “It’s just made my life a lot easier.”